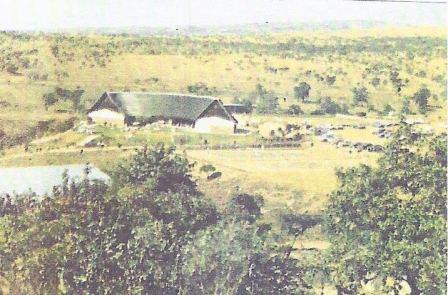 Utopia was started in the late 1960s with an application to convert 114 ha. of farmland into a pleasure resort with A-framed chalet accommodation. In many ways the plan was utterly unrealistic – witness, for instance, the original design which envisaged an astonishing 800 chalets crammed into its narrow four-kilometre length. Common sense and economic constraints prevailed and only 123 chalets were ever built.
​
The 1970s were the heyday of the ‘Utopia Plesieroord’ – a venue famous and occasionally infamous among city-dwellers who flocked from Johannesburg and Pretoria for weekend or holiday fun and recreation – up to 2,000 at a time.
That Utopia would be unrecognisable today, and not only because of the major fire which consumed its central buildings in the late 1990s. The main swimming pool was Olympic-sized, there were weekend events like Battles of the Bands and donkey rides, and there was a thriving restaurant with regular dances.  Open to all, Utopia became a popular venue for getaway weekends where chalets could be rented for just R2 and a restaurant meal was 50c.
By the 1980s and 1990s hard times were squeezing as the original developers pulled back. Effectively a Share Block scheme where participants owned not an actual chalet but only a share in the company hosting the chalet, it went through several financial upheavals. On a few occasions owners were faced with an appalling choice: rescue the scheme by pumping in considerable amounts of their own money, or see the entire scheme collapse taking their whole investment with it. At the end of the 1990s owners were persuaded that the stability promised by conversion to Sectional Title would be worth the price of injecting yet more of their own money for the process.

The Sectional Title scheme came into existence in 2003 and chalet values began a steep escalation now that bonds became possible.  Over the years following Sectional Title conversion some Utopians saw the nominal value of their units increase four-fold or more, with some approaching and even exceeding the million-rand mark. But the recession took its toll and property prices have fallen into line with the national trend.  Owners rejected a proposal to electrify the whole scheme; in today’s money the infrastructure needed would have cost each and every Utopian around R30,000 whether they wanted electricity for their own chalet or not. Eskom supply is in any case often erratic in the region, and subject to cable theft.

In 2006 in a reaction against the notorious custom of Utopian business being conducted ‘behind closed doors’ and the abuses of power this enabled, the first decision of the new ‘enlightened’ board was that all business would henceforth be open and transparent, with minutes of board meetings freely published and distributed. This has been an article of faith ever since.

Meanwhile the surrounding area is undergoing a ‘green conversion’ as implementation of the long-sought UNESCO ‘Magaliesberg Biosphere’ designation looks increasingly likely. The area to the south of Utopia has been declared a protected area, and Utopia itself is in the so-called ‘buffer zone’ which imposes strict prohibitions on ‘inappropriate’ development.

Nearby Buffelspoort itself has launched a project to attract visitors to the area, most notably by erecting and manning a tourist information kiosk at the nearby Buffelspark shopping centre, and involving local leisure industry operators in contributing to publicity, maps, creating walking and driving routes etc.